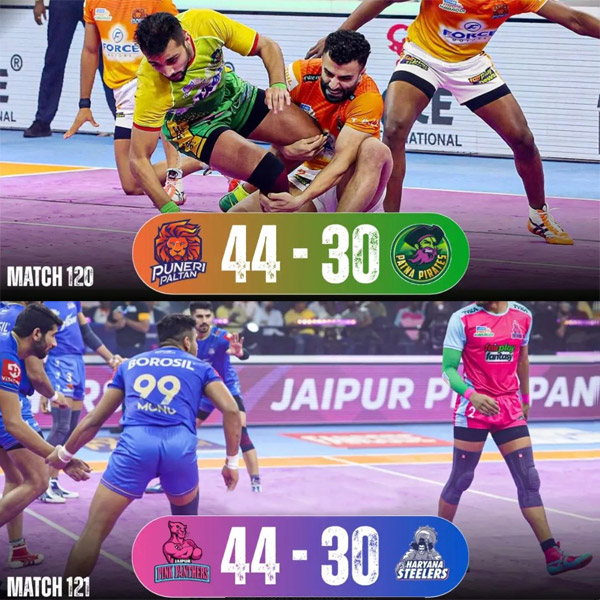 Akash Shinde and V Ajith’s heroics on Monday at the Gachibowli Indoor Stadium in Hyderabad ensured the Puneri Paltan and Jaipur Pink Panthers respectively secured a spot in the Pro Kabaddi League semifinals.

Both teams had last week become the first teams to secure their spot for the playoffs, but with Puneri Paltan’s 44-30 win over Patna Pirates, and the Pink Panthers’ win over Haryana Steelers by the same scoreline ensured they don’t have to play the extra match in the eliminators and directly move to the last four.

The understated Sachin did pick up a Super 10 for the Pirates, and Mohammadreza Shadloui Chiyaneh earned a High 5, but there wasn’t much more support from the rest of the team.

In the second match, the Steelers did manage to restrict the season’s highest scorer Arjun Deshwal to five points, but could not stop second half substitute Ajith from scoring heavily.

The Bengaluru Bulls and UP Yoddhas have also made it to the playoffs, but will await two more teams to make the top 6 cut before the lineup for the Eliminators is confirmed.