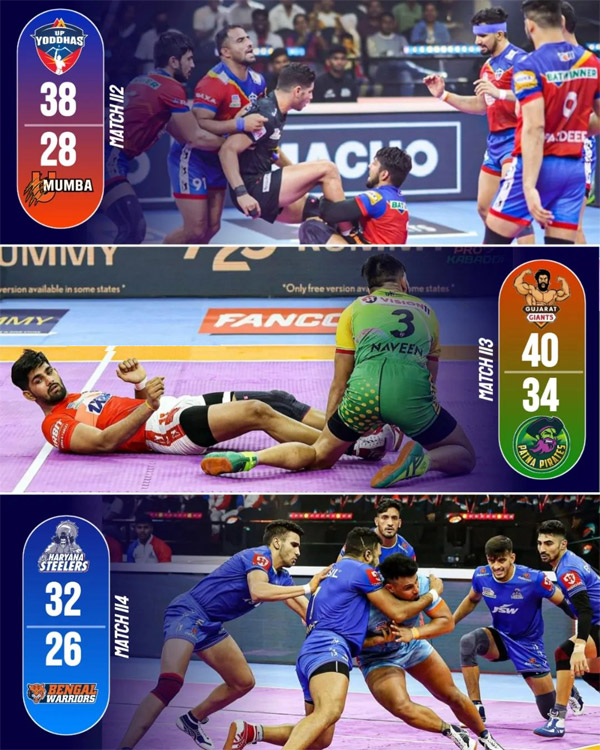 The Gujarat Giants dented the Patna Pirates’ chances of making the playoffs with a brilliant 40-34 win against them at the Gachibowli Indoor Stadium on Friday. Mahendra Rajput (12 points), Sonu (5 points) and Parteek Dahiya (5 points) were the stars for Gujarat Giants.

Despite holding faint hope to reach the playoffs, the two teams kicked off at a high pace, trading points constantly, in the early exchanges. At the end of the first 10 minutes, every Gujarat Giants player on the mat had scored a point, a measure of how high-energy the game was turning out to be. Facing an All-Out, the Gujarat Giants held the Patna Pirates’ raiders off on multiple occasions, before finally capitalising and turning the game on its head. A Super Raid by Mahendra Rajput took out C Sajin, Mohammadreza Chiyaneh, Monu and Sachin, to leave the Patna Pirates in trouble.

Haryana Steelers continued their winning run as they picked up a 32-26 win over Bengal Warriors in vivo Pro Kabaddi League Season 9 match on Friday at the Gachibowli Indoor Stadium. Meetu and Jaideep starred in the match for the Haryana Steelers, as they earned 6 points each to help their team get their third win in a row. Shrikant Jadhav was the leading points scorer for the Bengal Warriors, picking 7 points, but it was not enough to turn the tide.