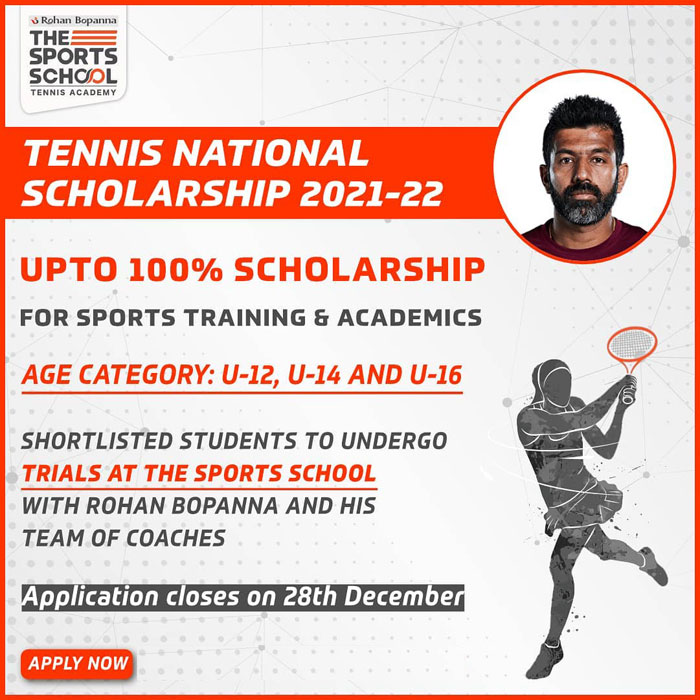 Shortlisted students to undergo trials at The Sports School with Rohan Bopanna and his team of coaches.

Tennis Program at the Rohan Bopanna The Sports School Tennis Academy brings a refreshing new dimension to tennis coaching in India. Rohan Bopanna The Sports School Tennis Academy offers an innovative and balanced curriculum that puts equal emphasis on both fitness and sports skills. It consists of well-structured, varied level programs that are mapped on global best practices to give young talent the finest and integrated advanced-level tennis program in India.

Our team of highly trained Indian coaches, and globally qualified fitness trainers oversee each and every step of your journey to success. The tennis program at Rohan Bopanna The Sports School Tennis Academy offers well-structured programs at various levels – ranging from a beginner program mapped on global best practices to a High-Performance program that is designed to give young talent the finest, integrated advanced-level tennis program in India.

ROHAN BOPANNA is one of the most prominent names in Indian Tennis. A global doubles phenomenon, Rohan has ranked as high as No.3 in the world; Olympic, Davis Cup, and Hopman Cup team member for India; and a recognized Champion For Peace are titles that define his illustrious career. Rohan won the 2017 French Open Mixed Doubles title, 16 ATP Tour doubles titles, and has been consistently ranked within the Top 15 in the world.

Being on the Indian Davis Cup team since 2002, he notched the world number 3 spot in doubles in 2013, thus becoming his career-high ranking. His partnership with Aisam-ul-Haq Qureshi earned the duo a runners-up trophy in the 2010 US Open men’s doubles event. The pair won four Challenger titles in quick succession and also broke into the top 10 doubles teams. He also played a decisive role in India’s 2010 Davis Cup triumph over Brazil, taking India back to the World Group for the first time since 1998. He was awarded the Ekalavya Award by the Government of Karnataka in 2005.

Carrying forward the torch of doubles excellence from his compatriots Leander Paes and Mahesh Bhupathi, Bopanna is also a Grand Slam champion and has won multiple Masters 1000 events with different partners. Rohan is considered among the finest tennis players in India. His powerful serve coupled with his huge on-court presence has made him one of the most coveted doubles players on the international tennis circuit.

Our philosophy is all about involvement, passion and follow through. We take tennis to the heart with coaches going beyond the brief of just working on players games but engaging with them constantly to ensure they are able to draw the best out of the talent. We believe in tracking – constant progress monitoring to ensure their is forward momentum in every players individual games. We have a development plan for each player – focused on charting a short, mid and long term plan for everyone individually and helping them achieve these targets through consistent monitoring and a calibration of training plans.

Sujith is the Coach in-charge at The Sports School campus. Sujith has over 8 years of coaching experience across age groups including High Performance students. A former player ranked as high as Number 5 in India, Sujith is USPTR HP, ITF Level 1 and AITA Level 4 certified. He has trained students from Thailand and Sri Lanka as well and has coached at Lifetime Tennis, USA in the past.

All Together we have won more than 30 national titles and 4 ITF titles.