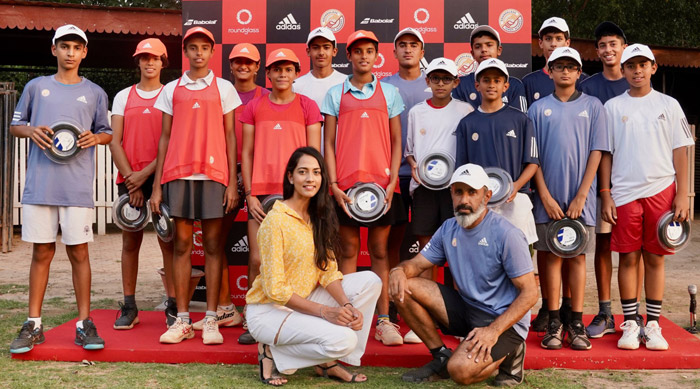 Coach Aditya Sachdeva ran one of the most successful tennis academies in the country, Team Tennis in the Capital, for many years. Having shifted to Chandigarh, he is pleased to have ’’more connect with nature, in a peaceful atmosphere to work”, even as he declares, ”I love the city’’.

There has been a lot of excitement in the air as the effort was on to select 20 kids for the academy on full scholarship in the under-12, 14 and 16 age groups.‘’ We have selected 15 kids, mostly in the 12 and 14 age groups. Ten boys and five girls. We don’t want to rush into it, to fill the numbers. We will wait for the right candidates’’, said Aditya Sachdeva in a video interaction from Chandigarh.

Even though Yuki Bhambri has been his prime ward over the years as he guided him to the Australian Open junior crown and the World No.1 rank in juniors, the coach has also been working diligently with Karman Kaur Thandi for many years.

Joining the conversation, Karman was very positive about the ‘’great initiative’’, and stressed that it was a good idea to get a strong start for the young athletes, with all facilities under one roof, as was the case for her during the training stints in Canada, France and Germany.

‘’The focus is also on the well being of the players, their education, and the preparation to help them compete at a high level’’, said Karman, who expected to return from her elbow injury lay-off, by the end of the months.

Having slipped from a career-best singles rank of 196 in 2018 to the current status of 447, Karman bemoaned the fact about limited opportunities during the pandemic and her own injuries keeping her away from competition, especially the recent Asia-Oceania Billie Jean King Cup teams event.

Coach Aditya suggested that the trainees would be given a taste of European competition early in their career so that they are better prepared to tackle the best, in the long run.‘’There is no dearth of talent. We need to give them the rightexposure at an early age’’, he observed.

The tennis centre operates at the Chandigarh Club with clay, grass and hard courts.‘’ I share the vision of Sunny Singh who runs the RoundGlass sports project in football, hockey and tennis. I love the fact that the young athletes get to do cross training with other sports’’, he said.