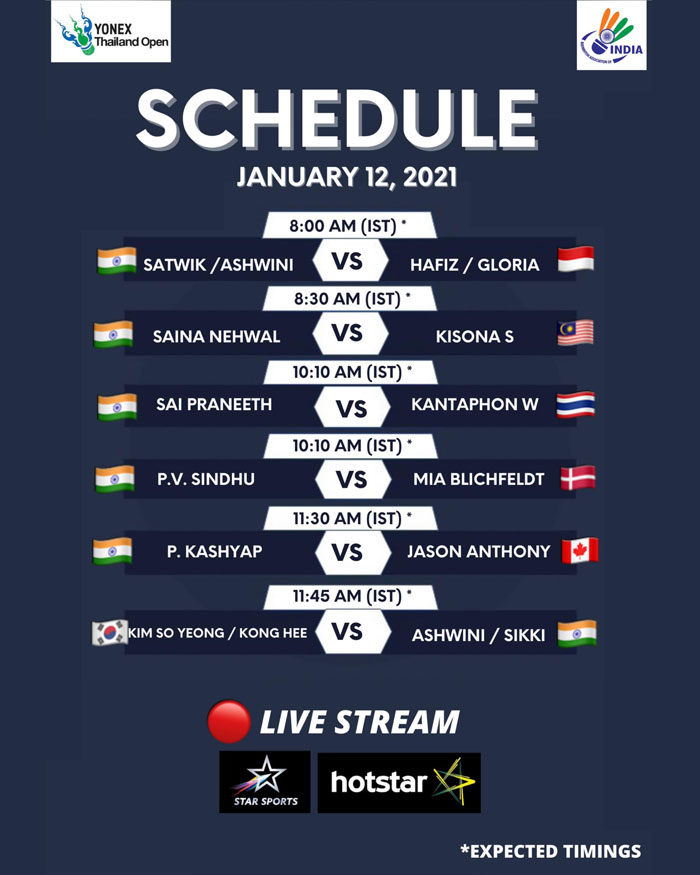 Badminton season for India marks its return with Thailand Open, the first badminton tournament of 2021, which starts on January 12 at the Impact Arena in Bangkok.

All the top Indian shuttlers including PV Sindhu and Saina Nehwal will be seen taking the court in Bangkok except Lakshya Sen, who pulled out after an injury. After a long wait, fans can see their favourite badminton stars in action.

Here’s a look at the draw:

Saina Nehwal, a women’s singles champion at the 2012 Thailand Open, was due to open the tournament against World no. 4 Nozomi Okuhara, but with Japan and China withdrawing from the tournament because of COVID concerns, draws have been reshuffled. She will compete against Malaysia’s Kisona Selvaduray. She will face either Busanan Ongbamrungphan or Sabrina Jaquet in the second round.

Former world No. 1 and 2012 Thailand Open men’s champion Kidambi Srikanth will start his campaign against fellow Indian shuttler Sourabh Verma. Whoever wins, may come up against another Indian HS Prannoy, if he sees off Malaysia’s eighth-seeded Lee Zii Jia in his first-round match.

Parupalli Kashyap who was due to face Japan’s Kento Nishimoto, will now be playing Canada’s Jason Ho-Shue. B Sai Praneeth, who won the 2017 edition, will open his campaign against Thai shuttler Kantaphon Wangcharoen and may run into world No. 4 Viktor Axelsen in round 2. Sameer Verma will go up against Shesar Hiren Rhustavito of Indonesia.

India’s top men’s pairing, Chirag Shetty and Satwiksairaj Rankireddy – men’s doubles champions at the 2019 Thailand Open – will be in action against Korea’s Kim Gi-Jung and Lee Yong-dae in the opening match. Meanwhile, Dhruv Kapila and M.R. Arjun will go up against Indonesia’s Ong Yew Sin and Teo Ee Yi. Manu Atri and B. Sumeeth Reddy will play Thailand’s Weeraphat Phakjarung and Wongsathom Thengkham.

Indian best bet in women’s doubles is the pair of N. Sikki Reddy and Ashwini Ponnappa who will begin their journey against fourth-seeded Korean pair of Kim So Yeong and Kong Hee Yong.

Where to watch the Thailand Open live in India?

Live streaming of the Thailand Open badminton will be available on Disney+ Hotstar OTT platform.

India has a pretty fair possibility of lifting the title with some of the ace shuttlers from the world withdrawing from the tournament. With Nozomi Okuhara, Aya Ohori, Akane Yamaguchi out of the scenario, Sindhu and Saina would mainly be expecting a tough contest against Spain’s Carolin Marin and Taiwan’s Tai Tzu Ying, in the women’s singles category. Whereas, the men’s brigade would be mainly expecting competitions from Chou Tien Chen of Taiwan and the Danish third and fourth-seeded Anton Antonsen and Viktor Axelsen, respectively. Points accumulated from the Super 1000 tournament will aid the players’ bid to qualify for the season-concluding 2020 BWF Tour Finals, to be held later this month.

However, it won’t have any bearing on the Tokyo Olympics qualification process as points earned here won’t count in the Race to Tokyo Rankings.