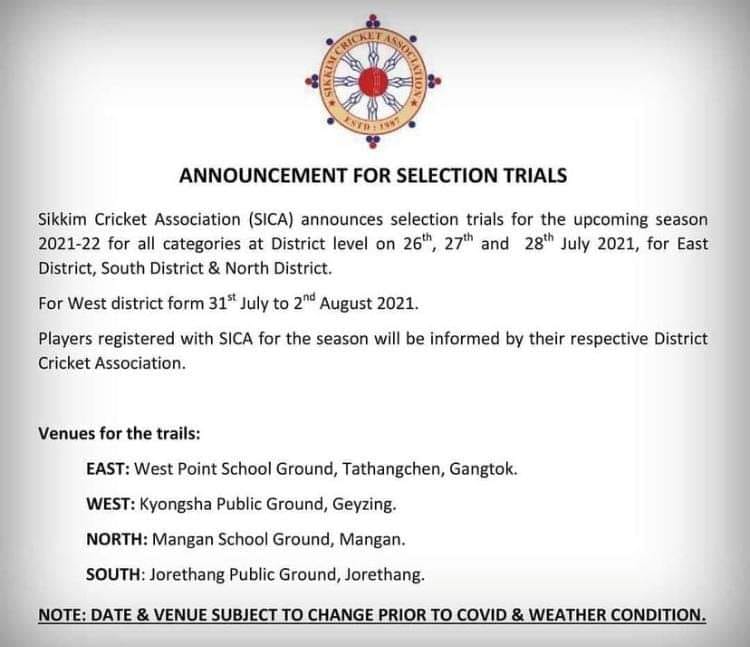 Sikkim Cricket Association (SICA) was formed on 5th May 1987 under the Leadership of Mr Jasbir Singh and Mr N. K. Pradhan, with the primary objective of promoting, encouraging and improving the standard of cricket in Sikkim. Presently, there are around 30 Cricket clubs in Sikkim. Among these clubs, few are registered with the State Government.

Sikkim was granted Associate Member status by The Board of Control for Cricket in India during 1990-91. Sikkim was able to send its first junior team (Under-19), to participate in the Cooch Behar Trophy tournament from 1995. Presently, Sikkim is participating in the Vijay Merchant Trophy tournament for Under-16, Cooch Behar Trophy tournament for Under-19 and the Under-23 Northeast/Bihar tournament. Sikkim has been able to record some notable performance in the junior level tournaments and has recorded victories over nearly all the teams of the East Zone except Bengal. In 2018 Sikkim got the full membership of the BCCI and since then participating it all the National Level tournaments of various categories.

The focus of the Association is advancing the game of cricket in Sikkim through Sportsmanship, leadership, discipline and hard work. Our goal is to provide the opportunity, environment and facilities to all the players.