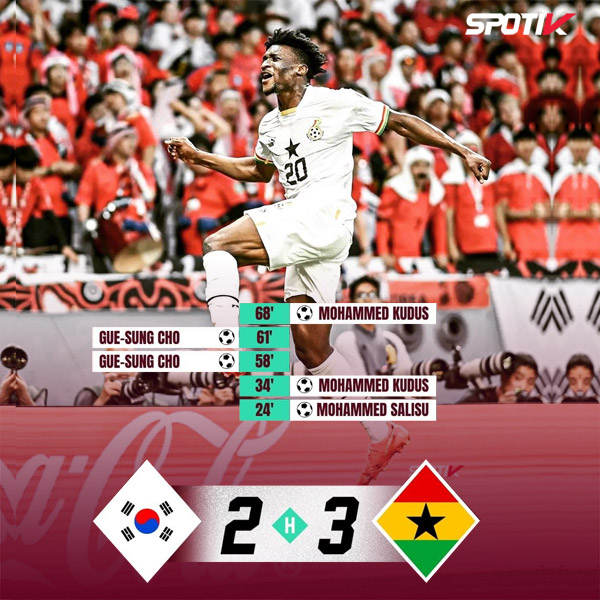 Ghana revived their hopes of reaching the World Cup knockout stages for only the second time with a thrilling Group H victory after a second-half fightback from South Korea.

The 2010 quarterfinalists impressed in an opening 3-2 defeat against Portugal and went in front in the 24th minute when defender Mohammed Salisu swept home Jordan Ayew’s curling free-kick.

Ghana had another 10 minutes later after Ayew whipped in another superb delivery from the left and the faintest of headers from Mohammed Kudus doubled the Black Stars’ lead.

South Korea, who finished fourth at the 2002 finals and began with a useful 0-0 draw against Uruguay, hit back with two headers from Cho Gue-sung in quick succession to draw level after the break.

But Ghana, the lowest-ranked side in the competition at 61st in the world, regained the lead in the 68th minute when Kudus side-footed home his second from Gideon Mensah’s cross.

They held on amid a late onslaught to earn a precious win ahead of a final group game against Uruguay, while South Korea coach Paulo Bento, who was red-carded after the final whistle, must pick his players up before facing Portugal on Friday.

Sporting News was tracking live scoring updates and highlights for South Korea vs. Ghana at the 2022 World Cup. Follow for complete results from the Group H match in Qatar.