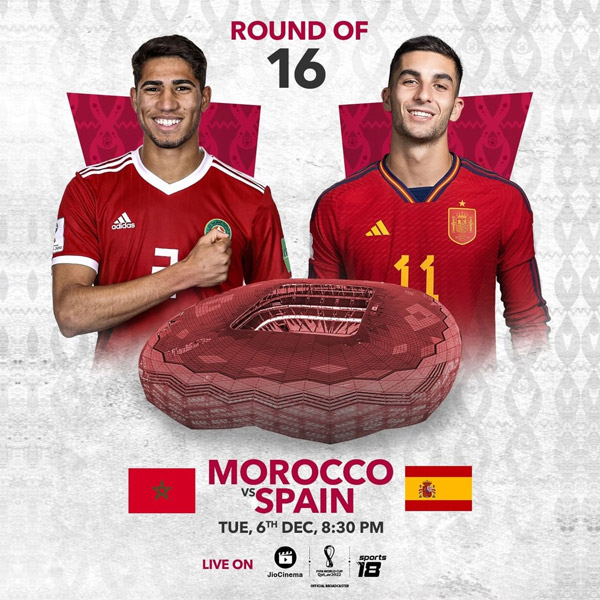 Spain head into Tuesday’s last-16 clash against Morocco as favourites but the Atlas Lions will sense that they can pull off an upset after an electrifying start to their World Cup campaign.

The Spaniards, who humbled Costa Rica 7-0 in their opening game, eventually finished second in Group E behind Japan following a shock 2-1 loss to the Samurai Blue – a result that also sent four-time champions Germany tumbling out of the tournament.

Morocco, meanwhile, defied the odds to top Group F ahead of Croatia and Belgium and are now making their second-ever appearance in the knockout phase.

They are the only Arab team left standing in the competition and will enjoy significant support at the Education City Stadium in Al Rayyan.

Coach Walid Regragui’s approach so far has focused on defending deep and capitalising on opportunities to punish opponents on the counterattack.

Central to his side’s strategy is Hakim Ziyech, who returned to the national team when Regragui took over from Vahid Halilhodžić in August. An earlier dispute between Ziyech and Halilhodžić had led to the mercurial winger being axed from the side.

His creativity provides Morocco with its most potent attacking threat but it is their resolute defensive play that has attracted plaudits.

The goal they conceded to Canada during their 2-1 victory in their final Group F encounter was the first in Regragui’s six-game reign.

Morocco’s goalkeeper, Yassine Bounou, said the team had already “made history” by reaching the last 16 but said it wanted to achieve “more” yet.