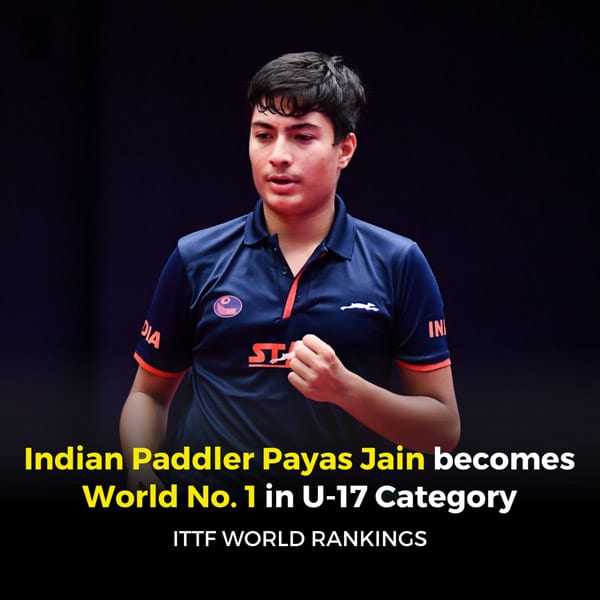 Payas Jain became the second Indian table tennis player to achieve the World No. 1 ranking. It came thanks to his title-winning performances in the youth U-17 boys category in recent times.

Payas Jain follows Manav Thakkar, who became the World No. 1 in the U-21 category in January 2020.

Incidentally, Payas Jain is the first Delhi table tennis player to reach the pinnacle of the ITTF world rankings and the first youngest Indian to do so.

Payas Jain has earned three U-17 crowns this season, along with a couple of bronze medals in U-19 category.

The Delhi-based table tennis player hit the groove with his maiden U-17 title in Slovenia. It came in a tough final against German Tom Schweiger (3-2) in the WTT Youth Contender in Otocec.

Payas Jain followed it up with another crown in the second WTT Youth Contender Championship in Tunis when he outclassed Tom Closset of Belgium. In Tunisia, he added bronze as a bonus in the U-19, after losing the semi-finals.

He ensured that he also brought home the gold in the U-19 biys category with a 3-0 win over his Delhi rival Yashansh Malik in the final in Muscat.

The successive titles in Slovenia, Tunis, and Oman sealed his top-ranking spot, upstaging Romanian Darius Movileanu. Payas Jain has 3458 points with the Romanian just 90 points behind him in the second position.

Payas Jain, who is playing at the North Zone National Table Tennis Championships, was elated on his number one ranking.

Payas Jain wants to shift his focus to the senior category

Payas Jain said after ruling the roost in the junior category, his focus will now be on the senior category. He said:

“I am very happy to achieve the number one ranking. This is the first time I am being ranked one in the world. It is a great feeling. The focus will now be on the men’s category. I wish to do well and get to the pinnacle there, too.”

In the girls category, Suhana Saini, thanks to her consistent performances, occupies the fourth spot in the world ranking.

Hansini, a promising table tennis player from Chennai, has jumped several places up the ladder to perch herself at No. 21.

In the Under-19 Girls, Swastika Ghosh (Maharashtra) and Yashaswini Ghorpade (Karnataka) are at a striking distance of each other at No. 7 and No. 8. The Bengaluru girl, with her recent performances in Slovenia and Tunisia, jumped 12 places. Diya Chitale, who dropped two places from her previous ranking, is placed 13th.