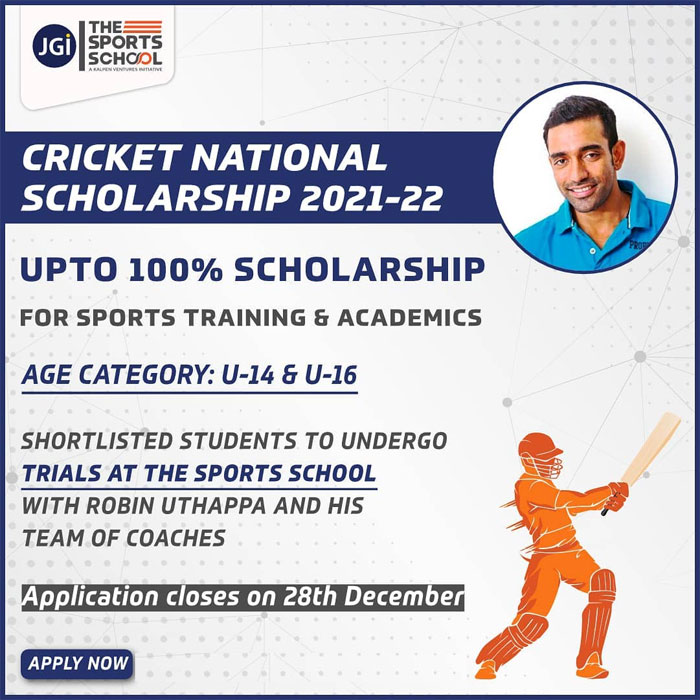 Shortlisted students to undergo trials at The Sports School with Robin Uthappa and his team of coaches.

The Sports School has collaborated with Robin Uthappa, as our Chief Mentor for Cricket, in order to provide our students with the experience and insights that he has gained while playing cricket both domestically and Internationally over the years. He regularly interacts with the students to help them understand and excel in the nuances of the game to its entirety.

Robin Uthappa is one of the most prominent names in Indian Cricket. An Indian International Cricketer, Robin is a right-handed batsman and wicket-keeper who made his ODI debut in the seventh and final match of the English tour of India in April 2006, where he scored 86 runs as an opening batsman, which became the highest score for an Indian debutant in a limited-overs match.

Robin’s first bout of recognition came with his innings of 66 runs for India B against India A during Challenger Trophy 2005. Later in the same tournament, he scored a match-winning century in just 93 deliveries. He was also part of the India U-19 team during the 2004 ICC U19 cricket world cup which also included players like Shikhar Dhawan and Suresh Raina. He scored 857 runs in seven games in the 2006-07 Ranji trophy season. He was then selected in the 15-member squad of the Indian team for the 2007 Cricket World Cup held in the West Indies. He was also a part of the 2007 World T20 winning Indian team where he played an extremely important role in helping with the first-ever World T20 championships.

In 2008, he started playing in the Indian Premier League (IPL) and has been one of the most sought after players in the league. He has played for Mumbai Indians, Royal Challengers Bangalore (RCB), Kolkata Knight Riders and Rajasthan Royals.