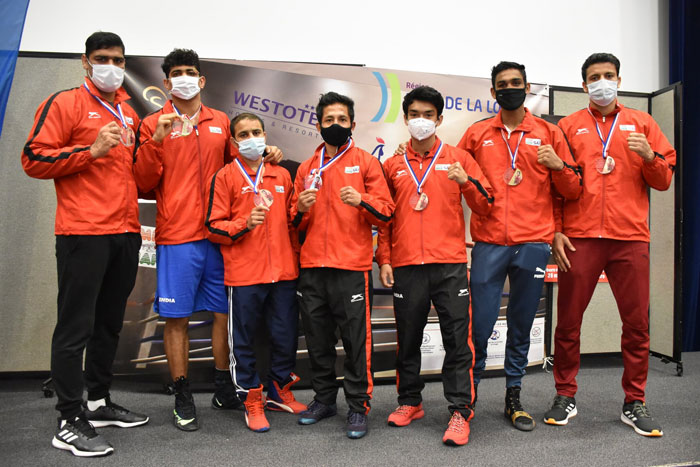 Germany’s top international event has been re-scheduled twice this year due to the Covid-19 pandemic and postponed finally from October to December. The name of the event was known as Chemistry Cup in the previous decades and has got the tradition and bright boxing history with many stars on the board.

The best six elite female and ten male Indian boxers are attending in European training camps and events until to prepare well to the World Olympic Boxing Qualifying Event which is scheduled to be held in June 2021. India qualified already nine boxers including four girls to the Tokyo Olympic Games through the Asian & Oceanian Olympic Boxing Qualifying Event which was held in Amman, Jordan on March 2020.

Five Indian women boxers have been involved to the travelling team, three of them are their bests at the featherweight (57kg). In that weight category, India did not qualify for the Olympic Games yet any boxers therefore the race between three boxers are tough. Two-time AIBA Women’s Youth World Champion Sakshi Choudhary, Manisha Moun and 2016 AIBA Women’s World Boxing Championships silver medallist Sonia Lather Singh all will be competing at the Cologne Boxing World Cup.

AIBA Women’s World Boxing Championships bronze medallist Simranjit Kaur Baath moved down to the lightweight (60kg) and amazed in Amman, and their experienced Pooja Rani both earned their spots in Amman. Both Indian girls worked hard in the training camps to accomplish their goals in 2021 and the Cologne Boxing World Cup will be an excellent preparation for them.

Jakarta 2018 Asian Games winner Amit Panghal achieved gold medal at the Bangkok 2019 ASBC Asian Elite Boxing Championships and silver in the last edition of the Yekaterinburg AIBA World Boxing Championships. The Indian flyweight (52kg) boxer won the Alexis Vastine Memorial Tournament in France and he is ready to do the same strong performance in Cologne, Germany.

Gold Coast 2018 Commonwealth Games winner Gaurav Solanki was in good shape at the Asian & Oceanian Olympic Boxing Qualifying Event but he was not able to qualify for the Games yet. His top national rivals at the featherweight (57kg) such as Commonwealth Games bronze medallist Mohammed Hussamuddin and Kavinder Singh Bisht are also will be there in the Cologne Boxing World Cup. Ashish Kumar and Satish Kumar both qualified for the Tokyo Olympic Games and continue their preparations in the German event.