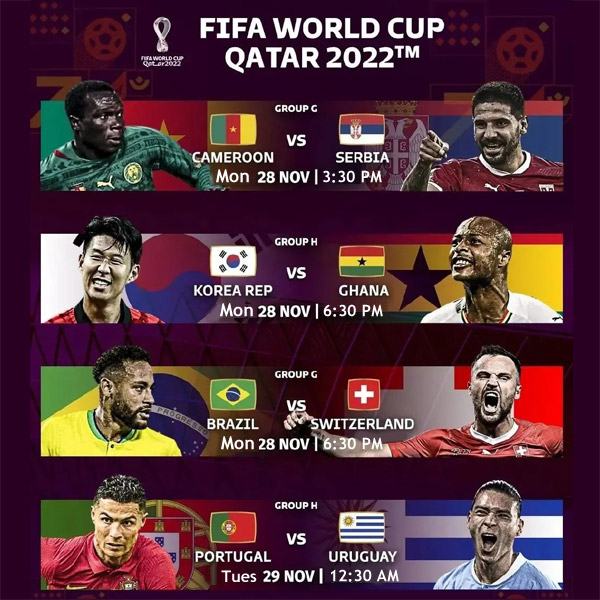 On matchday 9, teams in Group G and H will be in action in the FIFA World Cup 2022 where matches are coming thick and fast. While Germany prevailed against Spain to sneak out a draw, Brazil and Portugal have chance to join France in Round of 16 as they play the second game of their respective campaigns. Brazil overcame Serbia owing to a Richarlison masterclass, where he scored in 62nd and 73rd minutes, the latter being a sensational bicycle kick as the two-time champions opened their campaign in style.

As it has already been witnessed, no team can be taken lightly in the tournament and Brazil will have to be wary of Switzerland, who beat Cameroon in their opening game. In the other group, it is a high-octane clash between two European giants, Portugal and Uruguay. Portugal were run close by Ghana, but managed to prevail 3-2 in a cracking encounter but will have to be at their A-game, as they face Luis Suarez-starrer Uruguay, who played out a goalless draw against South Korea in their opening encounter.

In other matches, in Group G Cameroon will be up against Serbia while South Korea will take on Ghana in Group H.

Star players to watch out for:
1. Richarlison: It’s so good to watch someone at the top of his/her game and Richarlison was just class apart in his side’s tournament opener. Whether it was possession, movement on the field or eventually the goal-scoring, the Brazilian striker was cut above the rest of his teammates and in the absence of Neymar Jr, he will be key to his side’s chances, if the two-time champions have to seal their Round of 16 spot.

2. Cristiano Ronaldo: The Portuguese superstar Cristiano Ronaldo maybe without a club, however, registered his name in history book becoming the first-ever player to score a goal in five different World Cups. Ronaldo maybe past his prime but the quality he brings to any line-up he plays in, is just incomparable and the record-holder will be crucial to his side’s chances when they take on Uruguay.

3. Luis Suarez: Luis Suarez, who returned to his boyhood club Nacional this year, is a key member of the champion European side Uruguay. Suarez may not have had much impact in his side’s goalless draw against South Korea, however, with 68 goals in 135 national appearances, he is one of the most experienced members of Uruguay outfit and would hope to reignite his touch in crunch Group H game.

Here’s all you need to know about four FIFA World Cup 2022 matches that will take place on Monday, November 28:

The first match of the day will take place at the Al Janoub Stadium at 3:30 PM IST between Cameroon and Serbia.

In the second match, South Korea, will be in action against Ghana. This match will begin at 6:30 p.m. IST and be played at Education City Stadium.

In the 9:30 p.m. IST kickoff, two-time champions, Brazil will face Switzerland at Stadium 974.

Whereas the final match of the day will see Portugal and Uruguay fighting against each other at the Lusail Iconic Stadium. This match will start at 12:30 a.m. IST (November 29) onwards.

Where can you watch FIFA World Cup Group G and H matches live on TV in India?

All four matches of the FIFA World Cup 2022 on Monday, November 28 will be aired live on the Sports18 channel in India.

Where can you live stream the FIFA World Cup 2022 Group G and H matches in India?

The FIFA World Cup 2022 matches will be LIVE on Sport 18 and streamed live on the Jio Cinema app.