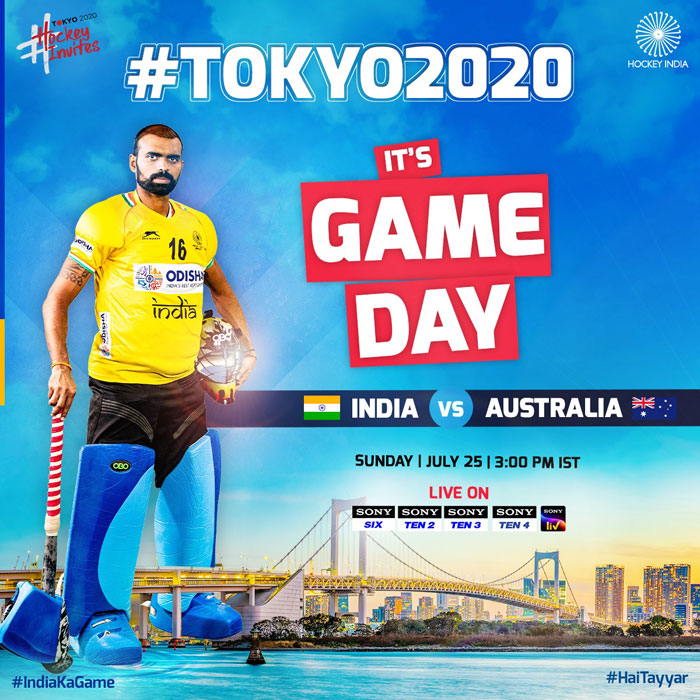 The Indian men take on Australia in their second group match of the hockey competition at the Tokyo Olympics. The Men in Blue got past a gritty past New Zealand side 3-2 in their opener while the Australians overcame hosts Japan by a 5-3 margin in less-than-convincing fashion.

With 3 points in the bag, both teams will look to go all out in a clash of the hockey titans that is certain to delight fans the world over. With regard to the Olympic Games, the Australians have a lot to prove to themselves and to the hockey world after failing to make the semifinals in 2016 while the Indians are seeking a return to the glory days after having made it to knock-outs in Rio after a gap of 36 years.

Manpreet and co. performed admirably against the Kookaburras in several big matches in the recent past – notably, in the final of the Champions Trophy at Breda in 2018 which Colin Batch’s team won via a shootout. The Indians got their own back by winning the shootout in the second leg of the 2020 Hockey Pro League clash at Bhubaneswar early last year after losing narrowly in the first leg.

The Australians missed a significant portion of their scheduled 2020 Pro League campaign and were out of action for well over a year much like Graham’s Reid’s team. The Indians have won just 22 of the 128 matches against Australia played thus far while the Aussies have been victorious 5 times against India at the Olympic Games having faced the eight-time gold medalists on 10 occasions with 2 matches drawn. After an edgy start in their respective openers, both teams will look to find their rhythm in the big match on Sunday which promises to be one for the ages. The match begins at 1500 IST on Sunday, July 25.

Where to watch? You can catch all the action LIVE in Sony Sports Network channels in India.