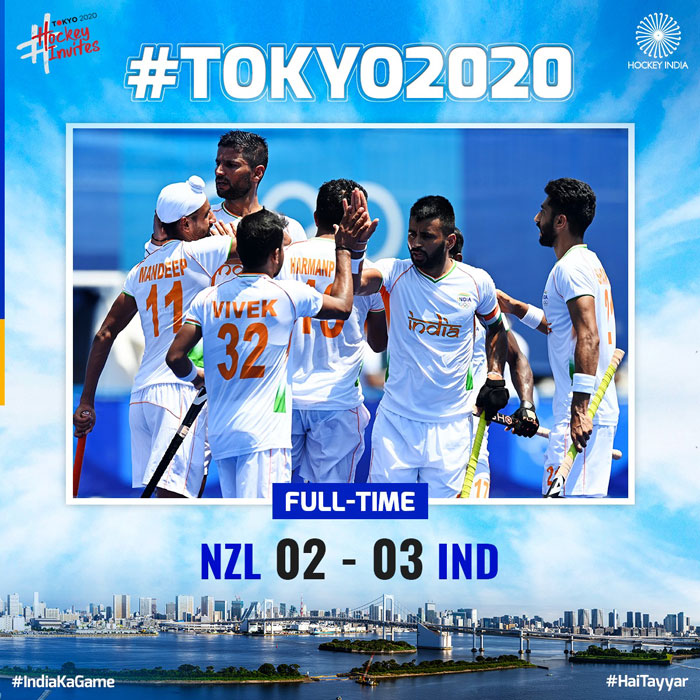 In a tough Pool A, this is one of the matches that India would have been looking to win and they have managed to do just that.

India beat a resilient New Zealand 3-2 in their first match of the men’s hockey competition at Tokyo Olympics on Saturday.

New Zealand moved ahead after penalty corner expert Kane Russell scored in the sixth minute from their first PC of the game.

Then, India earned a penalty stroke and Rupinder Pal Singh converted easily, sending the keeper the wrong way. It brought India back level and from that moment on, India’s confidence started to grow.

In the 26th minute, India sold the charging NZ defenders a dummy from the penalty corner and Harmanpreet Singh was on hand to convert. He fired it straight through the goalkeeper’s legs to give India the lead.

A little later in the 33rd minute, Harmanpreet Singh was at it again. He beautifully picked out a spot in the back of the net to give India a 3-1 lead.

But the match wasn’t done. India had controlled the second quarter and most of the third too. NZ, however, managed to find a way back.

The move started on the right flank before Stephen Jenness was on hand to finish and score a fine field goal. The Kiwis needed the goal and suddenly the pressure was back on the Indians.

The Indian team has a history of getting things wrong in the fourth quarter, but this time skipper Manpreet Singh and goalkeeper PR Sreejesh made some vital plays to keep NZ at bay and get India the vital win.

India put in a huge defensive effort and that will please coach Graham Reid. They were also pretty good from penalty corners and that will be another box that they would have ticked off.

In a tough Pool A, this is one of the matches that India would have been looking to win and they have managed to do just that.