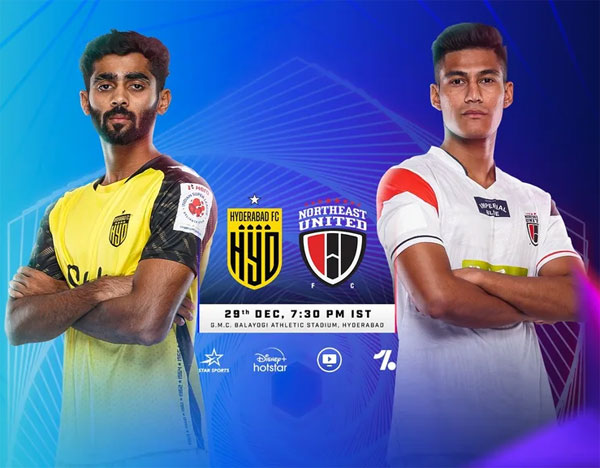 Hyderabad FC have been trading places with current league leaders Mumbai City FC and will be focused to not drop any points as they host a motivated NorthEast United FC at the G.M.C. Balayogi Athletic Stadium in Hyderabad on Thursday. The defending champions are two points off the top, while the Highlanders look confident after grabbing their first win of the season last week.

Last week, Hyderabad FC registered a comfortable 3-0 win over Bengaluru FC with Bartholomew Ogbeche also ending his goal drought. The defending champions lost out on the top spot when they lost to ATK Mohun Bagan in November, but have since won three games on the trot to keep Mumbai City FC within touching distance. They have scored eight goals in those three games, keeping a clean sheet in two of them and conceding only one in the other.

Despite being without three key players in the previous match, Hyderabad FC were able to notch up a win. Defender Chinglensana Singh and midfielder Joao Victor did not start a match for the first time this season, as winger Mohammad Yasir was also missing from the squad. The trio are expected to return for the next game.

“Every win is important in this league. You need to collect points in every moment that you get. After three consecutive wins, the mood in the camp is very good. We are ready to play against another good team,” said head coach Manolo Marquez. “They did not deserve to have zero points before the last game. They suffered losses in games they did not deserve to lose. The fact that they have beaten ATK Mohun Bagan in the last game makes this game even more difficult,” he added.

NorthEast United FC’s ten-match losing streak with Head coach Vincenzo Annese in his third game in charge at the club last week. Defensive frailties have cost the Highlanders a lot this season, but the side managed to keep their first clean sheet despite facing 15 shots, out of which eight were on target.

Annese has deployed his usual 4-3-3 formation in all three games so far and has only switched players marginally to find balance. The head coach is likely to field an unchanged XI against Hyderabad FC.

“We are motivated because the win last week has brought in a lot of emotion and created a positive mindset and hope for the future. We must continue to work hard and reach a level where we can compete not just at home but also away,” said Annese. “Hyderabad are one of the best teams with one of the best coaches of the league. They are dangerous at home, and we will need to be clinical in every situation that comes our way during the game,” he added.

In the reverse fixture earlier this season, Hyderabad FC secured a resounding 3-0 victory over NorthEast United FC. Including that encounter, the two sides have met seven times in the Hero ISL and the defending champions have won five times, while the Highlanders have a solitary win.