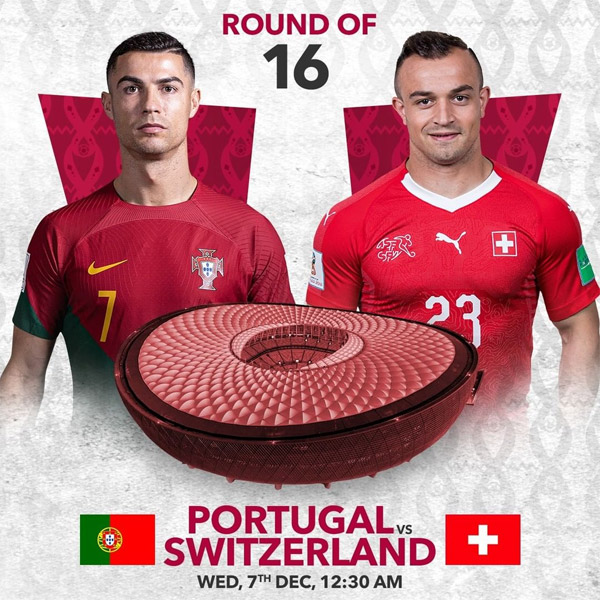 Cristiano Ronaldo will aim to fire Portugal past Switzerland and into the World Cup quarterfinals on Tuesday as Morocco bid to derail Spain’s bid for a second global crown.

Just two last-eight slots remain to be filled in Qatar after five-time winners Brazil swatted aside South Korea 4-1 and 2018 finalists Croatia squeezed past Japan via a penalty shoot-out.

Ronaldo was hogging the headlines at the tournament even before he kicked a ball after launching a tirade against Manchester United and their manager Erik ten Hag.

Following an exit by “mutual agreement” he is now seeking a new team, with sources saying he is in talks over a blockbuster deal with Saudi club Al-Nassr.

The 37-year-old superstar forward, who is appearing in what is almost certainly his last World Cup, has been a shadow of his former self in Qatar despite all the hype.

After scoring a penalty in his team’s opening clash against Ghana to become the first male player to score at five World Cups, he has huffed and puffed but has failed to find the net again.

Ronaldo’s starting role in the team remains a hot topic among Portugal fans, but coach Fernando Santos said he was not paying attention to the raging debate.

“I do not read this type of material,” he said. “It is not a lack of respect, it is simply that we have three days to train for a game and I am not looking at other kinds of news. We focus on the upcoming match.”

Santos said he expected a close contest against Switzerland. Portugal beat the Swiss 4-0 in the Uefa Nations League in June before losing 1-0 in the reverse fixture.