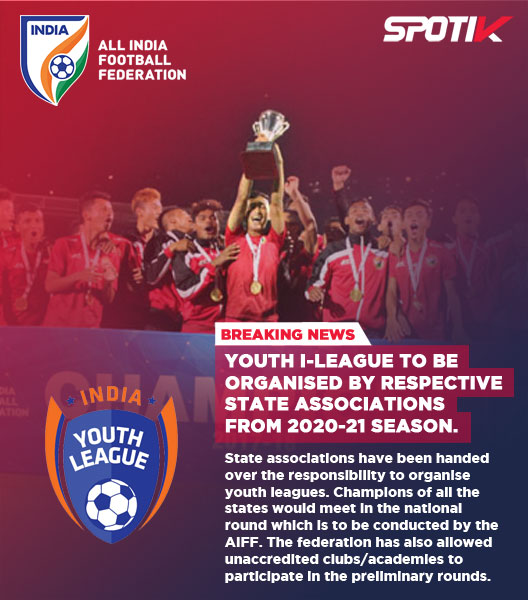 The All India Football Federation (AIFF) is decentralising youth leagues by handing over the responsibility to the state associations from the 2020-21 season.

In a set of new directives to the state associations, the apex governing body of football in India has instructed them to set up a league committee which will be responsible for conducting the various youth leagues. The body will formulate the regulations for the league, deliberate and oversee the day to day operations and decide on any relevant issues.

The federation has also allowed unaccredited clubs/academies to participate in the preliminary rounds, which will result in an increase in the number of participating teams. Given the situation due to the Covid-19 pandemic, it must be noted that getting your accreditation done in time for the upcoming season might be a challenge

Until the last season, the AIFF organised the preliminary round of the Sub-Junior, Junior, and Elite League by dividing the participating teams into various groups according to their state or city as it deemed fit. Subsequently, the group champions would qualify for the final round which would then be played at a central venue.Article continues below

As per the new move, the onus will also be on the state associations to ensure and be a part of grassroots development – something that has been a concern in the recent few years.

With the implementation of the new guidelines, it would see each states organising their respective age-group leagues in a format decided by the newly formed league committee in every state. Each of the state champions will lock horns in a final round which will then be conducted by the Indian FA.

“This is an extremely well thought-out move by the federation. You need to spread the sport across the length and breadth of the country. With unaccredited clubs also being allowed to participate in the league, the number of players getting competitive match time will also increase manifold,” said an official of a state association.

An additional slot may further be provided to the runner-up team of the state leagues based on the availability of slots in the play-offs to the final round of the concerned AIFF youth league.

It has also been made mandatory for all teams to register a minimum of six ‘home grown’ players out of their total list of thirty players in each category. A home grown player is defined as any player whose place of birth (State/UT, as per the birth certificate/passport) is the same as the location of the club/academy. If the participant fails to sign six players it will not be allowed to take part in the competition.